Buying frozen vegetables can be a great way to budget as they last much longer than fresh produce and are often cheaper. But are we missing out on important vitamins and minerals as a result?

From the field to your fridge

As we’re unable to grow certain produce all year round many of our vegetables are imported from abroad. This means they can often spend days or weeks in transit from the farm to your fridge.

Degradation begins from the moment they’re picked. Vegetables contain enzymes to help them grow and mature but after a while these enzymes can break down the vegetable and reduce its nutritional value [1].

As a result, many vegetables are often harvested before they’re fully mature, so you could be missing out on a lot of nutritional goodness.

Many nutrients are also lost through respiration, which continues even after the vegetable is harvested. Vegetables contain high amounts of water and respiration can result in both heat and moisture loss, which is another way nutrients are lost.

One way to combat this is through refrigeration, which slows down the rate of respiration and can help to preserve the nutritional value. 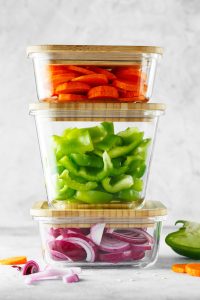 In comparison to fresh vegetables, frozen vegetables are generally picked when they’re at their peak maturity. The vegetables are then blanched in hot water, which deactivates the enzymes and halts degradation, then cooled in cold water to preserve their quality and remove any dirt.

From the outside, frozen veg seems to be a lot more nutritious than fresh vegetables, but some vitamins can still be lost during the freezing process. Vitamin C, an antioxidant important for keeping a healthy immune system, is highly sensitive to heat and water-soluble, meaning it can be leached out during the blanching process.

It’s for the same reason that certain B Vitamins can also be lost during blanching. Thiamine (Vitamin B1) in particular is very sensitive to heat exposure so its value can be reduced during processing. Thiamine is crucial for maintaining optimal heart and nerve function. 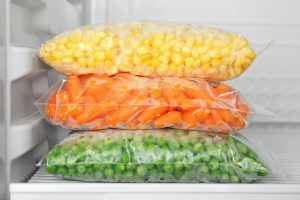 What does the science say?

One study which compared the levels of B Vitamins and Vitamin C in fresh and frozen fruit and vegetables including spinach, green beans and strawberries found that there was little difference in nutritional value between the samples. They even discovered that the nutritional content was not only preserved in the frozen sample but presented in quantities slightly higher than the fresh produce [2].

In a similar study, there was little difference in levels of minerals such as magnesium, calcium and zinc between the fresh and frozen samples. Any loss in the frozen sample was small and may have been due to variability in the raw vegetables [3].

So, is fresh really better than frozen? Despite the theory that some vitamins and minerals are lost during the freezing process, science seems to suggest that frozen veg can have roughly the same nutritional value as their fresh counterparts. This makes it a great alternative if you’re on a budget.

Here are some tips on how you can gain the most nutritional value from vegetables and prevent the loss of nutrients and minerals:

Sign up to the Low Carb Program today and receive 70% off of annual subscription.

Are you struggling with feelings of anxiety? Use this five minute ...

You may have heard about some of the seemingly implausible ...